What is Disk RAID And Why Should We Use It?

Home / Blog / What is Disk RAID And Why Should We Use It?

When dealing with hard disk during hosting, you will hear the word RAID always. Simply, it is a technology that holds the same data on multiple disks. This is done so that even if one hard disk is damaged, data from another disk can be collected. Basically, we see the use of RAID for data protection. Literally, RAID stands for Redundant Array of Independent Drives or Redundant Array of Inexpensive Disks. So, we can tell that RAID is a system or method of storing the same data in different locations on multiple hard drives or solid-state drives to protect the data in the event of a drive failure. Need to disclose, we see different types of RAID levels and the purpose is not the same in case of providing redundancy. Similarly, Disk arrays are complete data storage systems consisting of two or more hard disks that can speed up or duplicate stored data access.

How does RAID work?

In general, the process of working with RAID is placing data on more than one disks that means multiple disks. In a systematic manner, it allows input/output (I/O) operations to overlap. Thus, the performance increases. At the time of mirroring, the data ‘copy’ into multiple drives and then divided equally into multiple units.

Generally speaking, RAID (Redundant Array of Independent Disks) is a process that combines multiple hard disks to increase the speed of data exchange or increase data security. Let’s check different levels of Disk Raid and what is the primary purpose and work of them. Mainly, RAID 0 is used for striping, RAID 1 for mirroring, RAID 5 for striping with parity, RAID 6 for striping with double parity and RAID 10 which is mostly secure and reliable used for combining mirroring and striping data. If we make point, it would be something like this.

Now we will see the working procedures of RAID 0, RAID 1 and RAID 10.

Is used for speed. Here the same data is divided into different disks (RAID 0 has 2 disks) and is saved. This is technically called Disk Striping. Although it performs well, the data is not secure because the data is not saved anywhere else (technically, there is no data redundancy), So when the hard disk crashes, everything is lost. 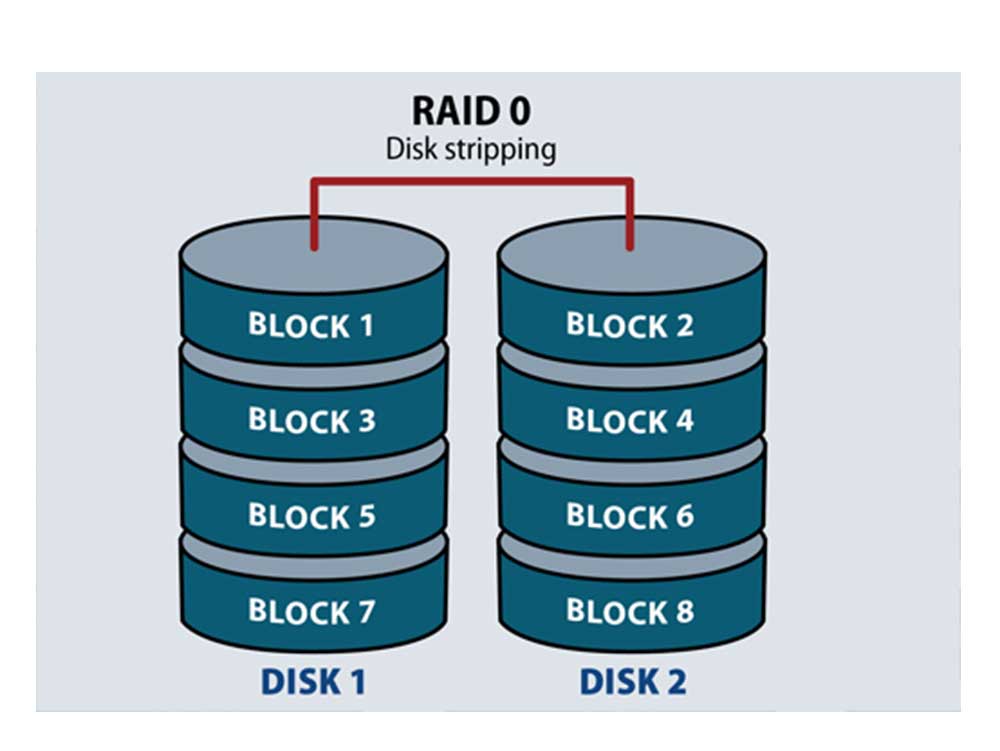 It combines multiple disks (2, 3, 4, 5) and converts them into a single drive, resulting in evenly distributed disks. So that Read/Write speed increases a lot. If 2 500GB disk RAID is 0 then total storage will be 1TB, video editing & rendering is more used on PC. Since disks share and store data at the same time, all data will be lost if any one disk is lost. So it is used only in cases where data security is not required for all tasks.

It is also called disk mirroring. There are multiple disks and data redundancy. As a result, even if one disk crashes, the data of the other can be restored. Most dedicated hosting packages have RAID 1 data protection services. Here too, there are two discs.

This requires (2, 4, 6) disks. It stores the same data evenly on 2 disks, so it does not increase any speed. If 2 500GB disk RAID 1 is done, the total storage will be 500GB, which means data is stored more securely in this process. In English, it is called Disc Mirroring. Even if one disk is damaged, the data on the other disk remains intact. Replacing a damaged disk and inserting new disk copies the same data from another disk to the new disk, so there is no chance of losing data. Therefore, it is used only in all cases where information security is required. Raid 1 is very popular for storing important data like money transaction accounts or emails. 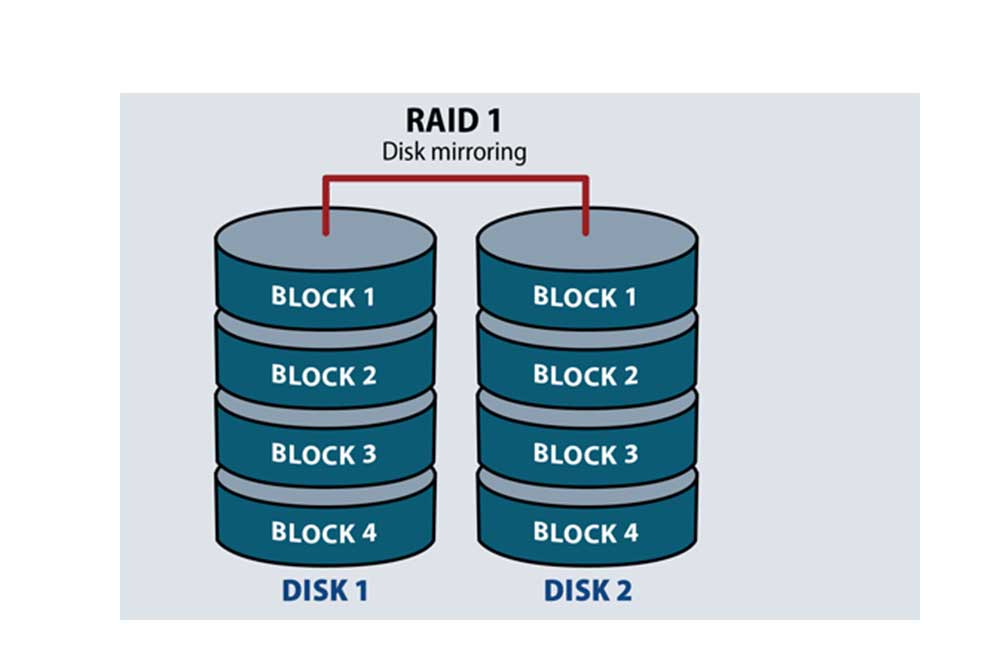 RAID 10 or (1 + 0) is a combination of RAID 1 and RAID 0. This requires at least 4 disks. Simply convert 2 RAID 1 to RAID 0. If 4 500GB disk RAID 10 is done, the total storage will be 1tb, even if any one disk is lost, the data will remain intact and if the disk is changed, the process will start again. Therefore, it is used only in all cases where information security and speed are required. So, it is known as Combining Mirroring And Striping.

Advantages And WHY SHOULD WE USE IT

RAID 0 is basically RAIDs through two or four hard drives. But if any hard drive crashes here, all your data will be lost. However, the advantage it gives is that it speeds up the data reading. You know and understand that the speed of a hard drive is much lower than the speed of a processor. If one of the data is in more than one drive, you can get the data quite quickly by coming from two and working together. If you use two hard drives of two terabytes, you can store 4 terabytes of data. No problem. However, if you lose the information of one, you will not get back the information of the other easily. 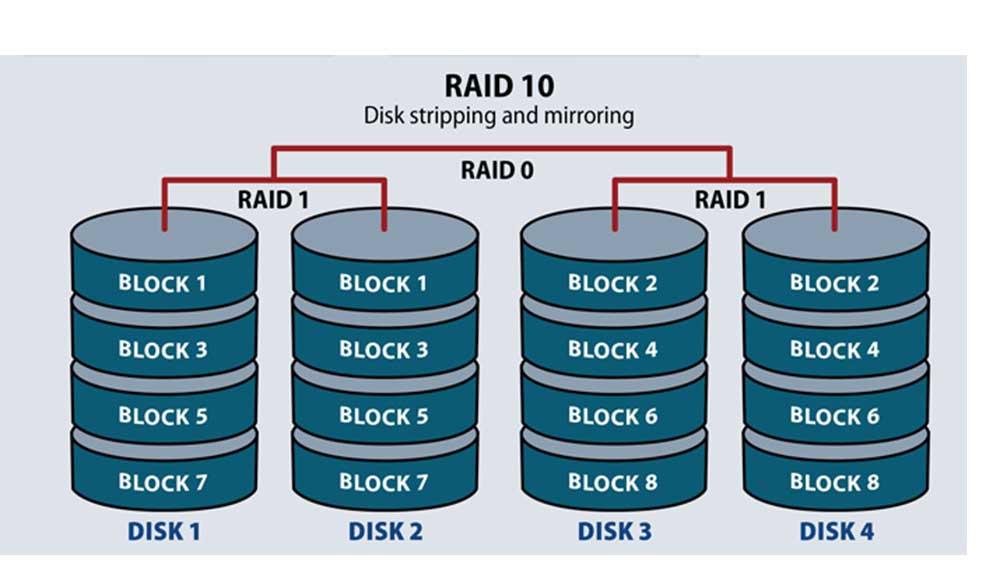 RAID 1 absolutely makes the mirror. You can configure RAID-1 on at least two hard drives. Here the information of one will be absolutely a mirror of the other. If one is lost in the other you will get the information you need. If you buy two hard drives of two terabytes and in the case of RAID 1, you can use two terabytes instead of four terabytes. In the case of hardware RAID, your operating system will show two terabytes. Read performance will be good in RAID 1 since at the time of reading one will take one data from one drive at a time. But the writing performance will remain normal. RAID Level-1 software mirroring or operating system crashes, you may not get all the information. So you should definitely buy a hardware RAID controller.

RAID 10 basically combines the benefits of RAID 1 and 0. You will need at least four hard drives here. The same thing will be written in two of the four data. If anyone’s hard drive is damaged, the data will be returned. The read capacity of the RAID 10 can be found much better. Different servers have built-in RAID controllers so you can raid them. It is usually configured from the BIOS.

This is a very complicated process, so don’t go without knowing it well. If something goes wrong, you will lose important information. Always use a hard disk with a new and equal amount of storage. Do not place too important data on RAID 0, as it is very risky. If a disk is lost, all data will be lost.